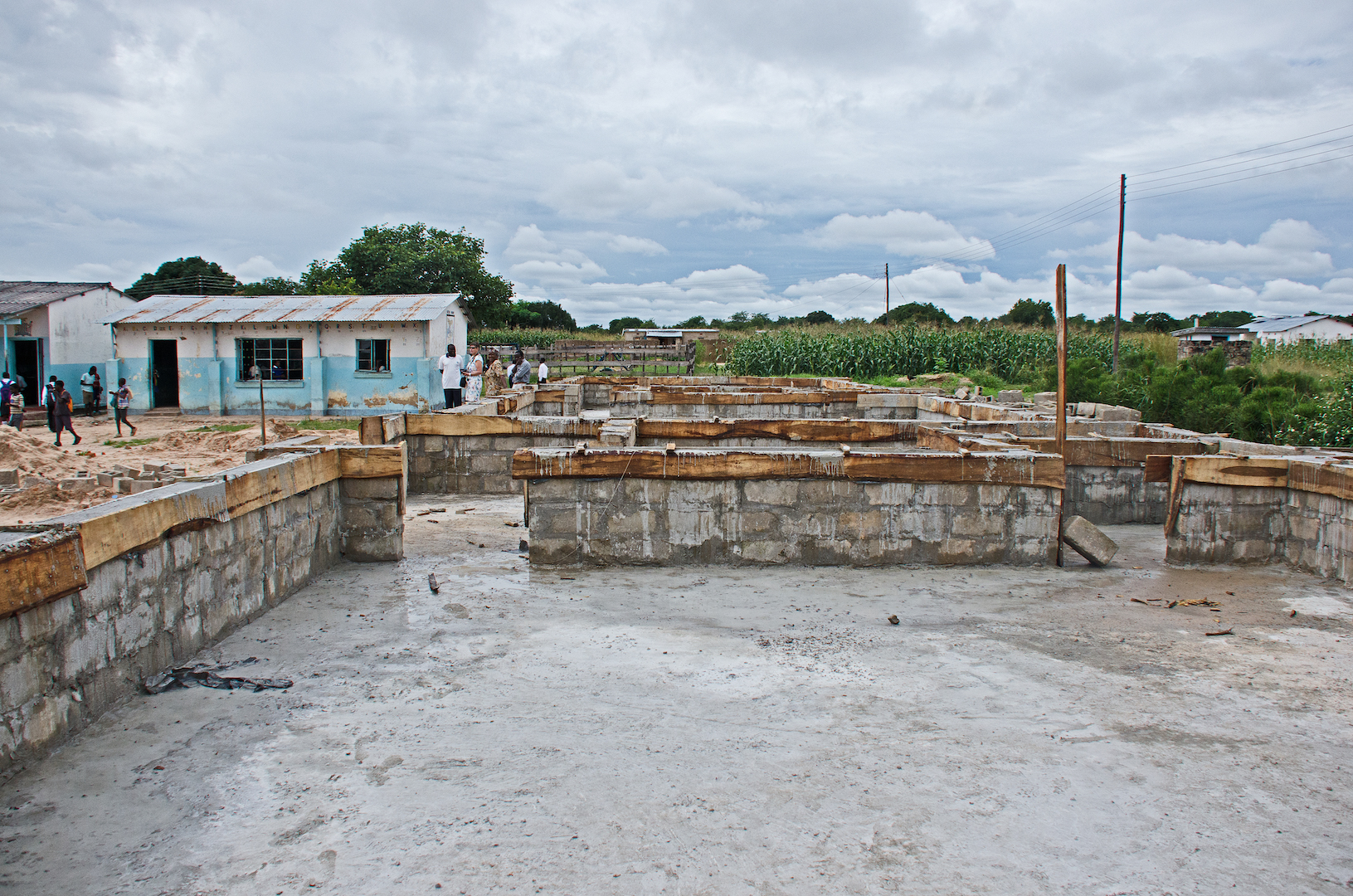 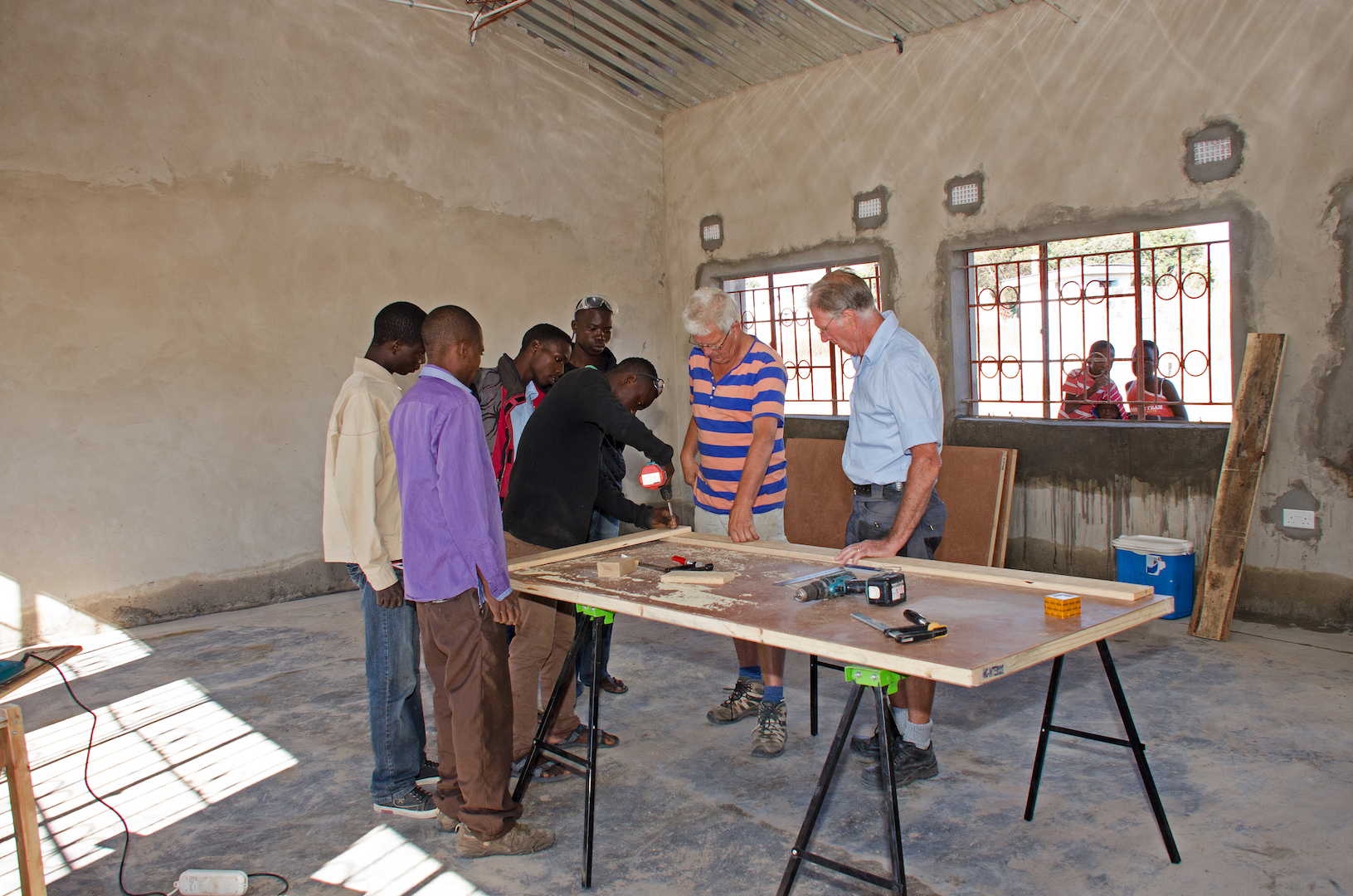 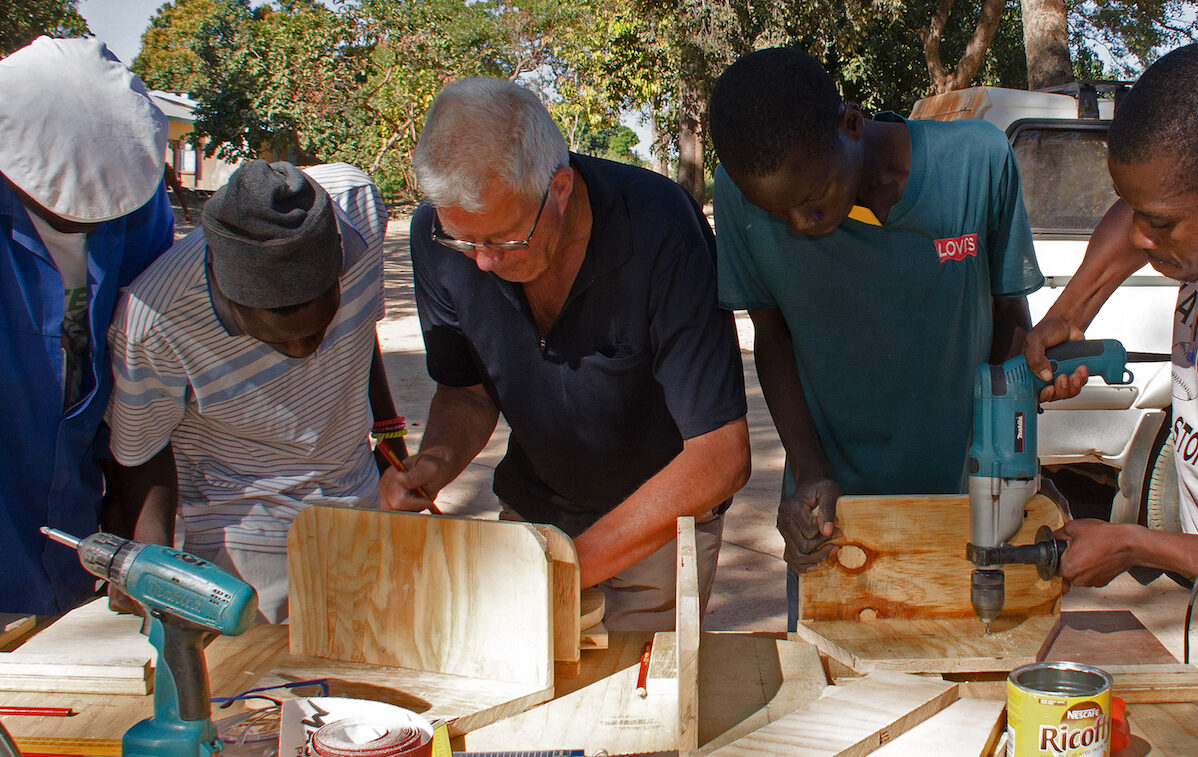 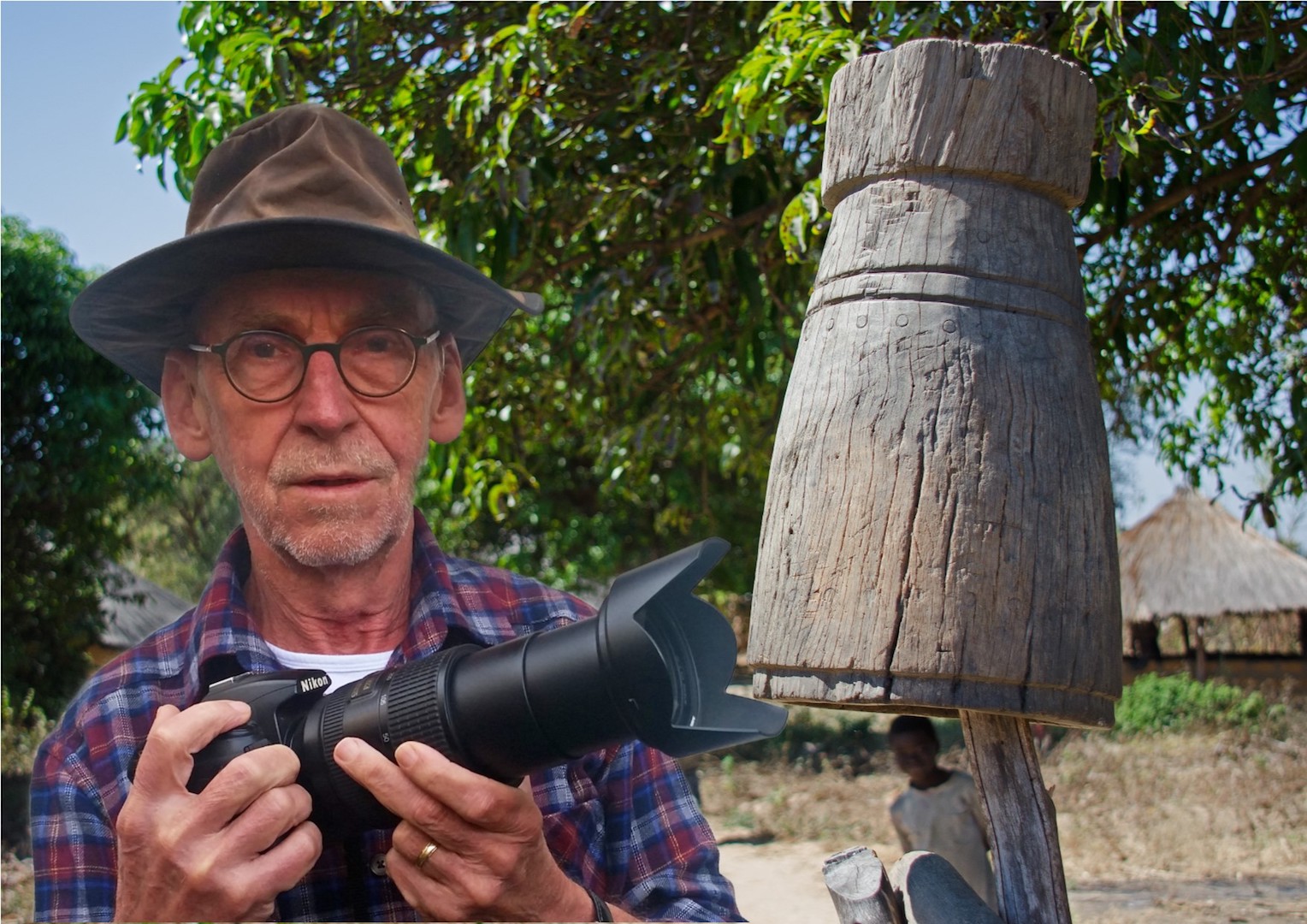 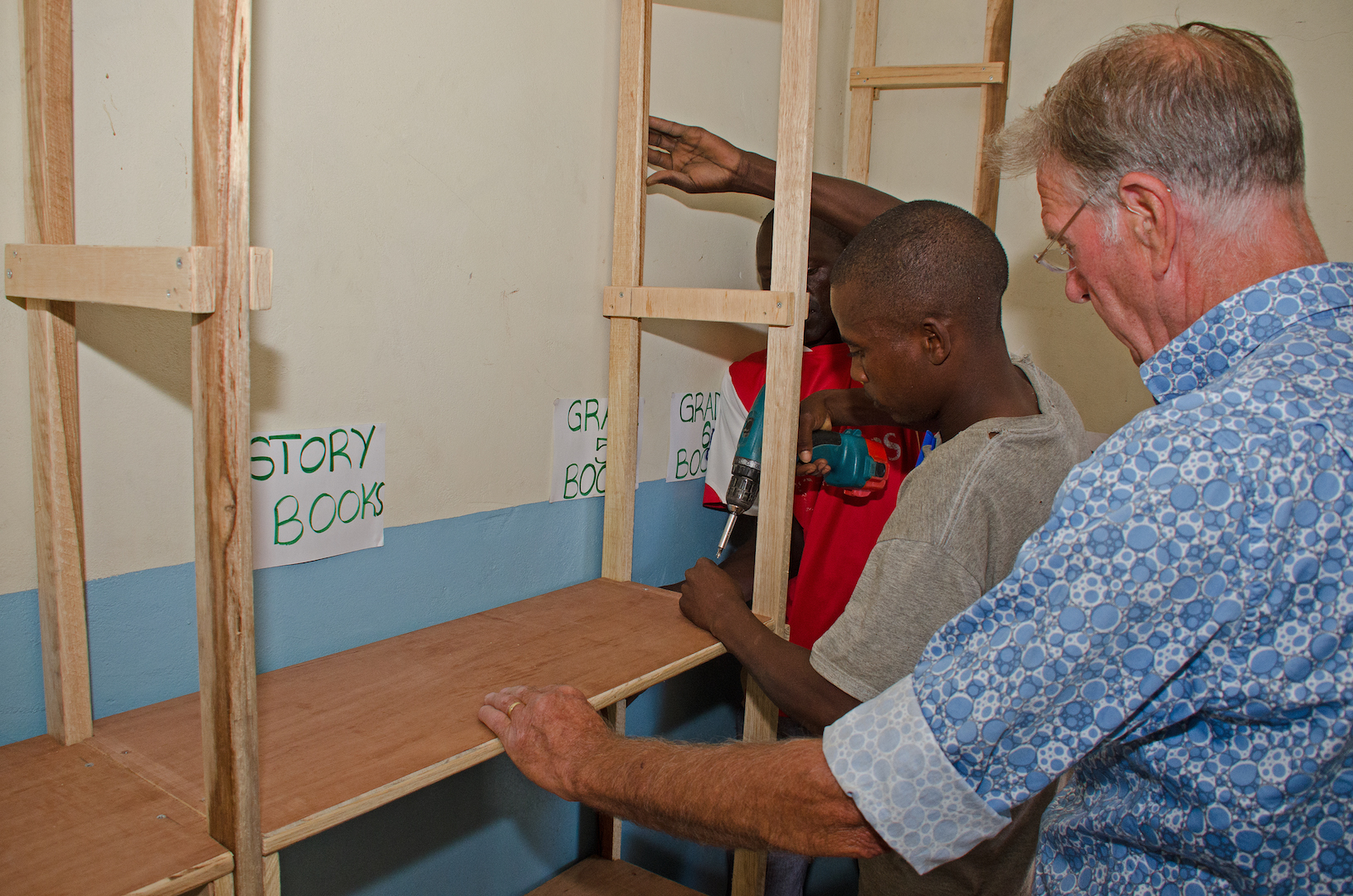 Retrospect Antoon Haagen
For the second time I was asked to go to Zambia. The first time to build, now to teach in carpentry and to teach how to use electrical hand tools. This question suited me very well, because I worked as a carpenter teacher in Apeldoorn in the social workplace for over 30 years.

The first Monday, June 26, was exciting for us, because we still did not know how many people would arrive the next day. Herman set off that morning to pick them up from Longe where the school was built this year. He returned with 6 young men, between 25 and 40 years old, all married and with children but without work. We started exploring the workplace, which we had created under a large tree, with an explanation of the desired measuring tools, hand and electric tools. It was an interesting experience because they now had it in their own hands now. Everything was new to them. Take e.g. the ruler of tape measure. This was viewed from all sides and folded, rolled up, etc. It’s actually difficult if you have never had such a thing in your hands before. In the work lessons we started with very precise measurement, e.g. the container, writing on a sketch, counting the centimeters and millimeters. Everything had to be learned from the beginning. They were well-motivated men, we soon noticed. Teaching skills with saw, chisel, drill, etc. our motto was “happy to repeat and keep practicing.” After a few weeks they were able to take the measurements in the school for which propositions are made and then make and place them. Regularly people from the board of BmB showed interest. Mr. Sishwashwa, board member, insisted that the men received a certificate of this carpentry session from BmB after 6 weeks. Herman took care of that and this beautiful document was handed out at the opening of the school in the presence of all the other people present there. We were introduced to 6 very motivated men who were nicely on time every day for 6 weeks, who made small household items for their own home, such as wooden spoons plus spoon rack, a table, a letterbox, a bench, a hatch for in the hut, etc. They have learned to install hinges and locks and to hang the doors. We have also placed a lot of emphasis on working safely. We were also allowed to look into their homes, meet with wife and children and enjoy the joy of this project together. And … mission accomplished …; make the men and their families happy there. How to continue? Create a cooperation of construction workers? If BmB succeeds? Awesome! I was allowed to participate in that. Many thanks!

Retrospect Piet Mous
During spring I was approached by BmB with the question: Would you like to give architectural lessons together with Antoon Haagen in Kaoma Zambia for BmB? I didn’t have to think long about this question, since in 2014 I had a great time in Zambia. It really appealed to me that BmB had the courage to take a completely different approach to Zambia. The Zambians can build excellent schools together with the BmB. But sharing knowledge is always a good thing. Six pupils attended the lessons who had never worked with a hammer and ruler. The first days were therefore fully devoted to the theory: such as measuring, drawing, getting acquainted with electric tools. The second week we were fully engaged in various activities such as hanging doors, making cupboards and book racks. It was sometimes difficult in practice, but the motivation of the students was great. Our biggest reward was that after six weeks the students (Robert, Cris, Andrew, Likonge, Wamunyima and Kababu) could be awarded a certificate. They were proud but we certainly no less. The fact that there is now a school in Longe with 9 classrooms where 800 children attend classes per day shows that the cooperation between BmB and the Builders in Zambia is going well. The festive opening of the school was therefore a highlight after these 6 weeks, for the students and their families, the school children, BmB and all other school / political invitees. My own reward was that the door to a better future for the people in Zambia opened a little further. Returned home on August 4, tired with a head full of impressions, but with a very good feeling about these 6 intensive weeks. Nice to be in Bakhuizen again, but there is still a piece of my heart left in Zambia.