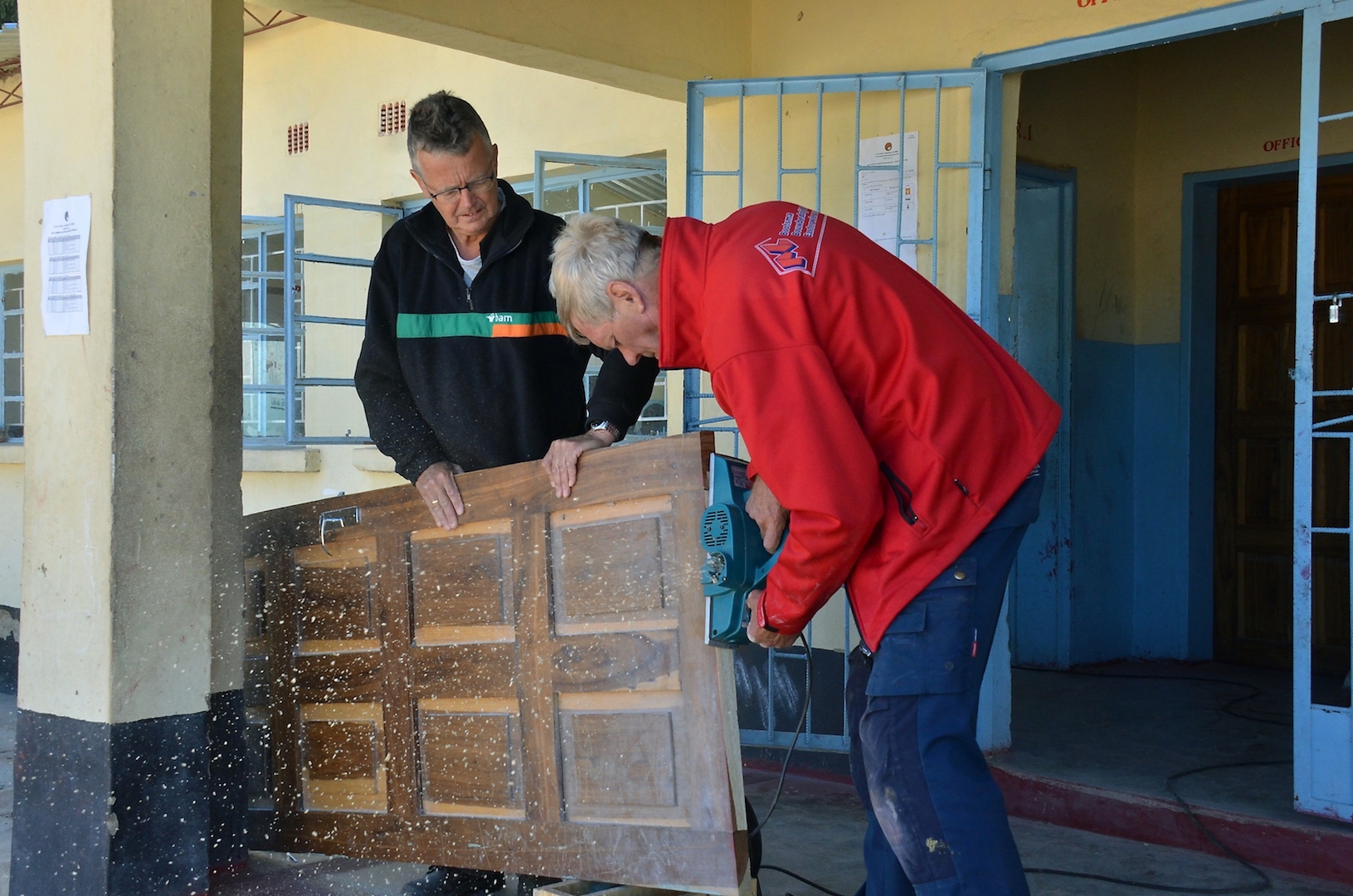 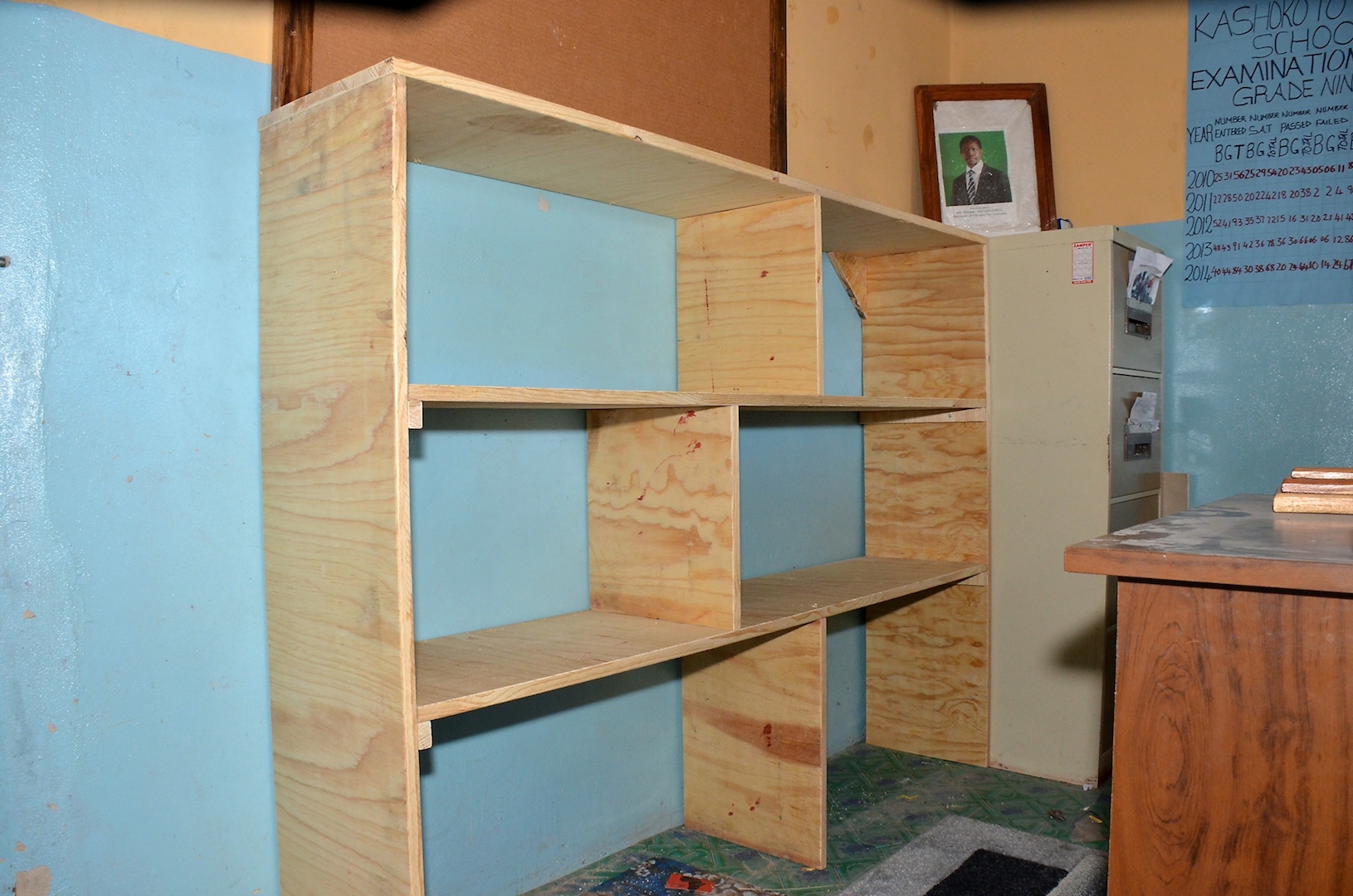 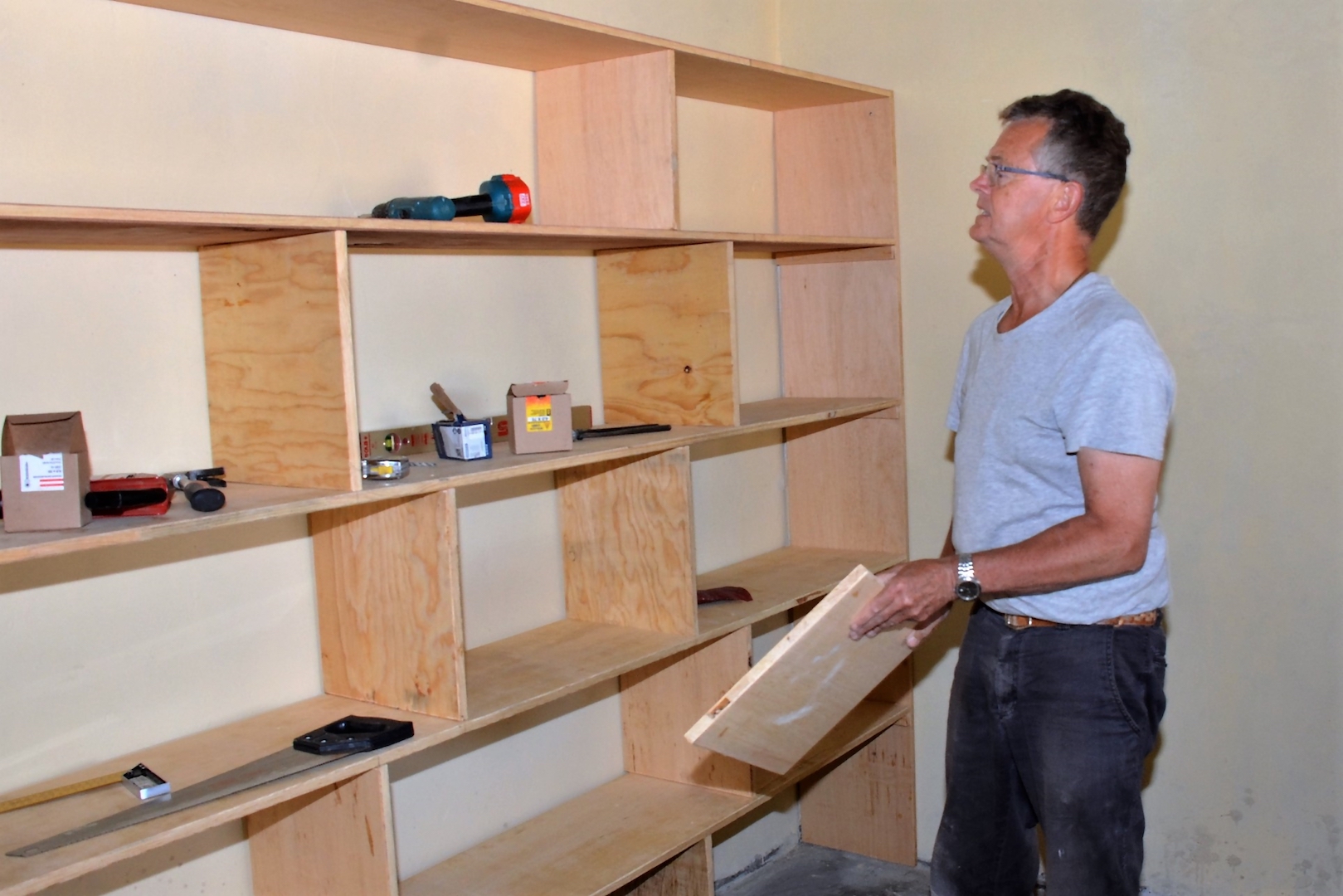 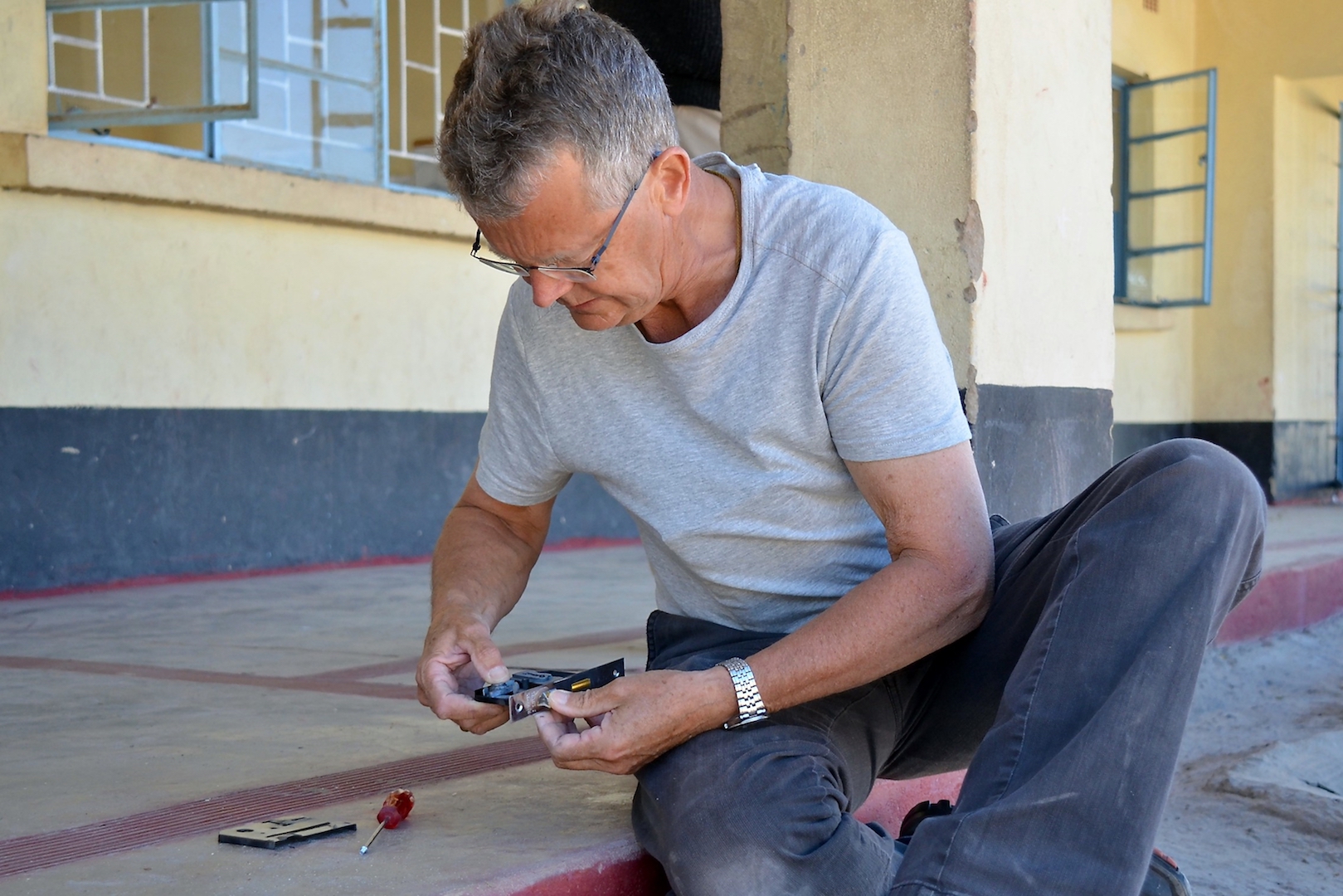 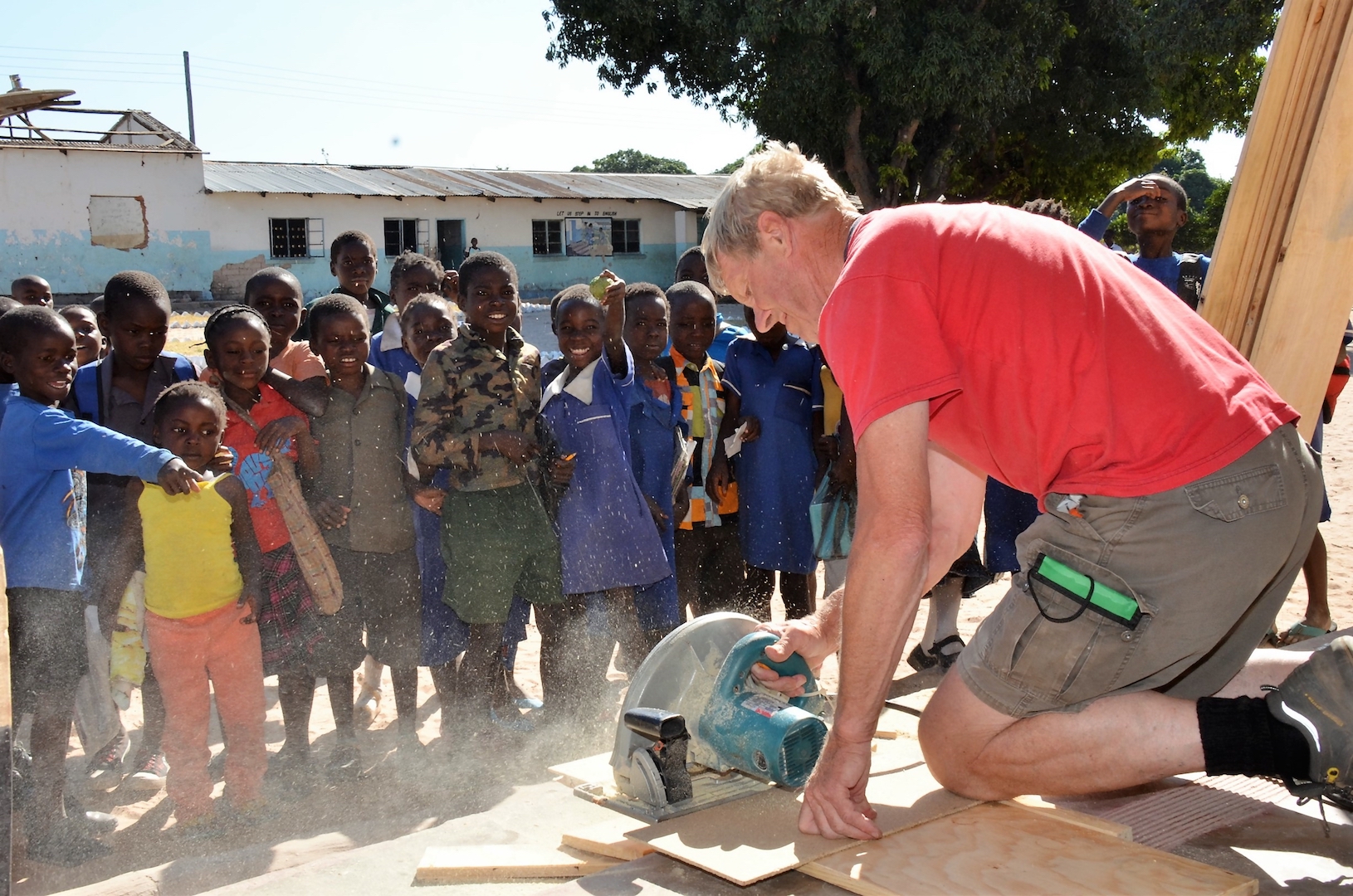 At the beginning of the year I was contacted by email by Herman Bouma if I wanted to help for 6 weeks to build classrooms in Zambia. I first had to get used to the idea of ​​going all the way to Zambia, but after a personal conversation with Herman, I became enthusiastic and decided to come along. The third of June the time had come, Herman Bouma, Cees Anema and I went to Lusaka, the capital of Zambia via Dubai. When we arrived in Lusaka, we met Johannes Bouma, Mr. Limata and members of the BmB board. We went to Kaoma, where we would stay in a guesthouse for 6 weeks. A whole different world than the Netherlands, many children who have to walk for hours to get to their school. Women who carry vegetables and water on their heads and men who carry charcoal bags on the back of their bikes. Most people there live in huts made of clay with a thatched roof. There is a lot of poverty there. During the first weeks, Cees and I carried out a lot of maintenance on the schools that were already built by BmB. In principle, this is the responsibility of the state, but it has no priority there. We have also made rack cabinets in 10 schools for storing books and notebooks, as they were always on the floor. We also participated in the new school in Luampa-Kahumbu. This was delivered in the last week that we were there because Father Johannes Bouma would return to the Netherlands with us for good. I have received a lot of admiration for the BmB board in Zambia, which does a lot of work there and always has to be ready. I enjoyed working with Herman and Cees at the BmB schools there.

Beforehand, after Herman’s explanation, you will look up a bit against the unknown with deviant food, sun and primitive accommodation, but everything was better than expected. Very nice people who have taken excellent care of us with the very limited resources they have at their disposal. It struck me the longer you are there, the more natural it becomes. We have been to all locations of BmB and have carried out maintenance on doors, hinges, locks and handles. All locations also received a number of wooden racks. We had to make the racks ourselves from plate material and as waste is too expensive, we had to be efficient with materials. We made sleek and playful cupboards depending on the possibilities. The last week we went to Johannes in Makeni to carry out a roof repair, multiple heavy branches fell on it during the grubbing of trees. For Johannes this was the last period in Zambia and this was the occasion to be addressed on a festive occasion, where we were also allowed to be present. Making appointments and thinking ahead is very difficult for a Zambian. They do not always see the usefulness and advantage of this. Technical training would be a welcome addition so that they can maintain the newly built schools themselves. They are certainly handy considering the things they make and offer for sale, only the quality is still missing. There is still room for improvement, but the peace and friendliness of a Zambian should, as far as I am concerned, be allowed to enter the West. I had a very successful trip, partly due to the good relationship with Wout Merkus and Herman Bouma.

This year we traveled with two instead of the usual three builders to Kaoma. Will it work out? Of course! We all have the same attitude: we will make it a success again. And it has become a success. It was as in the old days to me! It can be seen from the reviews of Wout and Cees that they were mainly busy with maintenance work and making cupboards. Like every year, my job consisted again of talking to the locals. Listening to their wishes for the future. Their future! And believe me, there are many wishes! Unfortunately, too much for all to be fulfilled. The evening falls early in Kaoma, so the evenings are long. A great opportunity to occasionally discuss the course to be taken by BmB. Is BmB still on the right course or do we have to make changes? If so, radical or bit by bit? Sending builders to Kaoma for six weeks, isn’t that too long? Isn’t it smarter to train Zambian boys to be good construction workers rather than to help building? Are there teachers who want to give lessons there for a few weeks? How much time is needed to give someone a good education? The answers to all these questions seem quite obvious but the implementation is many times more difficult. Oh yes, I also photograph to be able to cheer up the newsletter, among other things!